Like suggested by wikipedia, KISS is an acronym for “Keep it simple, stupid” as a design principle noted by the U.S. Navy in 1960. The KISS principle states that most systems work best if they are kept simple rather than made complicated; therefore simplicity should be a key goal in design, and that unnecessary complexity should be avoided. The phrase has been associated with aircraft engineer Kelly Johnson.

In my experience, I worked on various types of technologies, having the opportunity to inspect the source code and, in general, the development of an application both from the client side (which can be a SPA or a native App) and from server side. By relying on such experience, I tried to develop a simple architecture that involves the respect of fundamental PATTERN in a CRUD context. I will try to illustrate the foundations of this architecture, used as a starting point in all my projects. Into the design I kept in mind the KISS concept and in this perspective I would provide 5 layers as known as tiers, with a specific accomplishment task:

I use a multi-tier architectural model where the tiers order in the list, is strictly associated to the information flow: from the frontend to get up to the DAO 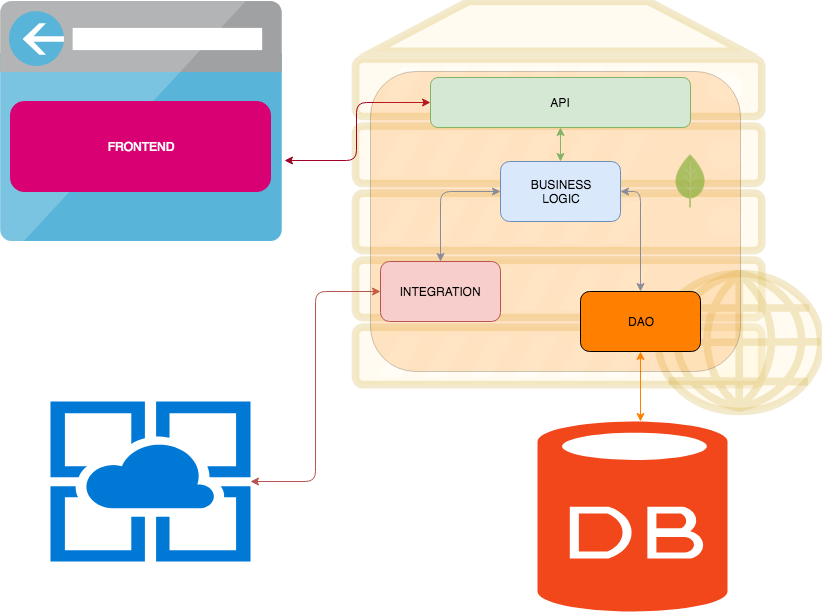 The article refers to the project downloadable at the link https://github.com/paspao/springboot-kiss-architecture

The project is managed using maven (i.e. parent and child types); even the frontend, developed in Angular, is included into the maven building phase in order to create a single artifact (further details available in the FRONTEND paragraph below).

Trill down each tier, I prefer to use a BottomUp approach. Let’s start with the data.

Data Access Object. When I’m talking about CRUD applications in early step I’m talking about data, in SQL, NOSQL, but in any case data to collect and process. This module represents the deepest point. This tier performs the data, it describes the entities and the access logic. Caution: simple data access logic of inserting, modifying, deleting and displaying data, without any binding to other tiers; it’s the deepest tier and also it has no dependencies with any of its brothers, it does not handle specific aspect of the application, such as authorizations, transactions or other: just access to data exclusively, as well. In a Springboot context I’m performing Entity and *Repository paradigms. In detail I show you the @Configuration of the DAO module, central annotation in each Springboot application/module.

So I define where the Components, Entities and Repositories are located. In addition I enable transactions, so anyone using the DAO module will not have to worry about aspects of configuring the DAO module.

The simple CRUD data management is not enough: we probably need to interoperate with other systems that don’t depend on our data, such as JAX-WS or JAX-RS services, or specific printing systems with different protocols, etc. This component includes all these interactions/integrations without a specific binding to the application’s context in order to guarantee you a very high reusability (like the DAO module, also this tier is leaf type).

Here I report the central point of the module configuration: there is only one reference to the Service definition and the instance of a third party service (GeoApiContext).

Later of the identification of the data to be processed, each application has to deal with the logic of interaction between entities defined into the DAO tier. You have to combine user requirements with application logic, break them up and then expose to the upper tiers simple and readable signatures. So this tier lets developers to make some processing without entering into the details of how the database is structured or what integration is underneath.

We find here the definition and usage of DTO useful to mask the data stored in the database system or in the various integration beans: why? There are some reasons: first and foremost it is a form of information hiding for sensitive data (for example password, timestamp or other informations needed for data consistency, but no to the end user). Instead, if the returned data needs to be elaborated (like data combined from multiple sources), DTO helps to structure these data in a suitable way. Another aspect is the serialization of data: in some context you have to transform the information present in the database, to make it usable to humans. So the developers have to “stain” the Entities with serialization logics, whose purpose should be only to represent the data, for example: the DATE field on the database system may be a number, but we represent it in a printable way, so probably we will use a formatting annotation; that’s a solution! but in this case we will link aspects of serialization to an entity, and in the long run this solution will leads to unusable codes. Harold Abelson said: Programs must be written for people to read , and only incidentally for machines to execute.

The DTOs allow to face the problems listed, creating something like a “buffer”, consequently more loosely coupled and more reusability.

Summing up, the BUSINESS LOGIC communicates with the DAO tier and the INTEGRATION tier, creating a synergy and an interaction between them. Besides, it brings logic and data transformation into DTO, usable by other tiers. Warning: the business logic tier uses DTO defined within and the same applies to the data returned. They NEVER are objects defined in other tiers, so to ensure what we said above and to give the ability to work on data returned.

Another feature of this tier is the transaction management: since it implements business logic it is able to determine whether an operation on the data can be successful or not, therefore defines the “transactionality” of the operation.

Here is the @Configuration of the business logic tier:

It is the only module with a direct link to the DAO and INTEGRATION tier, so it will necessarily have to import the configurations in order to use them. Moreover, to speed up the mapping between Entity and DTO it is a good practice to use frameworks born for this, avoiding long and unreadable code blocks of setter and getter; in my example, I use a mapping framework called Dozer.

In this tier falls the logic of presentation, it represents the entry point of our application, at least from the server point of view. The services like JAX-RS or JAX-WS are defined with the mainly task of presenting the data in XML, JSON or other. It talks only with the BUSINESS LOGIC tier: a service will only call one or more services offered by the Business layer, it will never use the INTEGRATION or DAO tier directly, nor it will use objects defined within them, in order to avoid tightly coupled and spaghetti code.

It deals with the management of authentication and authorization: here it is possible to determine who can perform an operation or not: in the layers below is much more complicated or the informations to determine what role is necessary is not yet known.

The APIs ALWAYS need some documentation: one of the lack of the REST world is the absence of a universal descriptor of these services. A technology that guarantees this aspect is Swagger (now OpenAPI): it allows to document the APIs, but the documentation produced can also be reused to generate the client part, therefore not just a descriptive one. For example, in my case the communication layer with the REST services was completely generated by the Swagger description of the services: in the FRONTEND module there is the remote-services folder that contains the result of this generation by the tool [https://editor.swagger.io] (https://editor.swagger.io).

In the configuration class of the api tier, I import the business tier’s one and set the generation of the Swagger documentation.

It represents the Single Page Application: this type of application must be completely separated from the application and the usage of the Rest technology already guarantees this aspect, but it is necessary to pay attention to how the communications with remote services are implemented. Often I have fallen into very bad organization and management of various HTTP clients used to invoke remote services, and I mean the references that are found throughout the application. To solve this problem and to make the SPA strictly separated from everything that represents the communication with remote services, as already mentioned, I use Swagger technology to generate a stub that allows communication with the Rest API. So the developers will use what is produced by Swagger, mainly because it provides a lot of ready to use code, with different usage options, and you no longer need to rewrite it. Also the logic will be implemented elsewhere, because the remote communication section (Stub) will be continuously regenerated and no developer will ever dream to implement its own logic in sources that could be overwritten (I hope).

To ensure that an application written in Angular can be included in the building cycle of a Maven project, I ensure that even the FRONTEND becomes a Maven module by adding a pom.xml file. This module will not produce any artifact so the packaging will be pom type, but in this way I can insert it into the maven build and create dependencies with its siblings. To be able to integrate an Angular build in a Maven context, I use a plugin named frontend-maven-plugin: it allows the installation of a Node and Npm instance

and the consequent invocation of the Angular CLI to manage dependencies and builds angular side.

When the Npm build task is invoked, the control will be taken from the Angular CLI, as described in package.json:

The output path is set to dist/resources/static/ui, and the path dist/resources is also configured as resource of the frontend module. Combined with the configuration of the tier API that follows below, it allows to inject the result of the Angular build in the Springboot application. In the output path (of the build command in package.json) there is a special directory …/static/…, one of those where Springboot allows to define static contents.